I’m Marcus Morgan and I’ve been working in the bisexual community for 30 years. I’ve volunteered at the ground level and spearheaded from the top – and I’ve met and spoken to literally thousands of bisexual people about their experiences of being bisexual in modern Britain.

In 2019 I became the first bisexual activist to be awarded a “Point Of Light” commendation by a UK Prime Minister when Theresa May hailed me as the UK’s bisexual champion, and I was also shortlisted as an LGBT Role Model by the National Diversity Awards.

I think you should keep your bisexual staff.

I’m one of the authors of 2012’s “The Bisexuality Report” published by the Open University, and have spoken about bisexual issues at a range of events and meetings over two decades, including Prides in the UK and overseas, and at LGBT conferences here and in North America.

I’ve delivered presentations in boardrooms, training at conferences, and performed “educational stand-up” at theatres such as the Royal Vauxhall Tavern. My one-man show “Fencesitter!” had a limited West End run in 2019.

I have been brought in as an expert by London LGBT Pride, Stonewall and the Government Equalities Office to consult about their engagement of bisexual people.

I have twice been nominated for the Lesbian and Gay Foundation’s “Homo Hero Awards” (most recently 2014) and received a lifetime achievement award from the UK bisexual community in 2002. 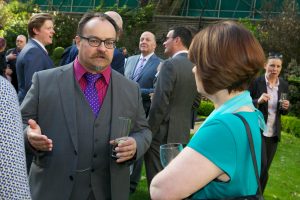 My skills as an organiser and team leader have been of great use organising international and national bisexual conventions, with attendance of these annual events reaching record highs under my stewardship (BiCon London, 2010)

Since 1993 I have chaired support groups for bisexual people to discuss their experiences, and created social events for us to find our community. Among bisexual activists in the UK I am highly regarded as I am the leader and founder of the activist group The Bisexual Index – where I am the principal author of their website materials.

A confident, engaging and entertaining bisexual speaker, I have appeared on television and radio championing bisexual rights and explaining bisexual issues, including many live appearances. I have also written for The Guardian and LGBT press about bisexual invisibility. I’m also perhaps the only LGBT magician performing activist magic in the UK.

If you need a bisexual speaker for an event, want a training session on bisexuality or have realised your panel on LGBT issues has no bisexual representation then please email me.

You can also find me on LinkedIn and now Twitter.